In association with the fabulous Tyneside Cinema, Newcastle's super-swish indie cinema supreme, the Canny Comic Con kicked officially launched with on Friday night with a drink and draw film night!

It was a chance for comic artists of all calibres to turn up with a sketchpad for some socialising and doodling from 7pm till 11pm to launch the weekend. As a special treat, there was a showing of Howard the Duck in the bar - a rare chance to catch this (ahem) classic on a big screen with other comic fans!

It was a great shindig, and some crazy fun stuff got drawn! Many thanks to the Tyneside Cinema.

10.00-10.30
What Comics Aren't - an introduction to why comics are unique
Jack Fallows shares some tasty truth nuggets about comics! Shattering misconceptions, dispelling stereotypes and planting the comics flag firmly on planet 'Art Form' will all be on the menu. Why are comics not just subliterature for subliterates? What makes them stand out? Why should you be amazed and in love with them? Come find out!

10.35-11.15
The Information Superhighway to Your Audience! Digital distribution for self-published comics
How can you use the web to get your comic to its readers? Stacey Whittle chairs a panel with Daniel Clifford, Leonie O’Moore, Gordon Robertson and Terry Wiley that will discuss the potential benefits and hurdles to using digital comic distribution. In a constantly evolving field, what new models, tactics and opportunities are out there for a comic creator who wants their work to be read?
HEY! This panel was recorded - you can listen to it right NOW!


11.20-11.50
Tween the Lines - turning Viz into an animation, again
Alex Collier was a co-editor of Viz comic for eight years. Sick of drawing still images, he went off and learnt how to animate them instead. Alex talks about the new animated version of the iconic comic (featuring the voice talents of Gavin Webster, Sarah Millican, and Steve Coogan), which he directed with Baby Cow’s Tim Searle for Channel Four. (Ages 18+, advisory: very strong language)

11.55-12.55
Grandville and the Anthropomorphic Tradition
Bryan Talbot discusses his graphic novels Grandville and Grandville Mon Amour and the venerable and ongoing tradition of anthropomorphic characters in illustration and comics from which they have grown, pointing out references to this tradition and 19th century art within the Grandville books themselves. (Suggested for ages 12+)

1.00-1.45
Knocking Down the Door - how to get a break in pro comics
If making a living from comics is your dream job, how do you go about getting it? Steven Finch chairs a panel with Mack Chater, Paul Davidson and Al Ewing, offering advice to anyone looking to land a professional comics gig. They’ll be talking about their own routes into the comic industry and providing essential tips for aspiring creators hoping to follow them.

2.25-2.55
Cartoons About Farting Bought Me Sports Cars
Simon Donald, Viz co-founder, creator many infamous characters, cartoonist and writer for the sweary grin-mag for 24 years, regular face of some of British television's most forgettable detritus, and foulmouthed stand-up comedian, talks (at length) about how his love of comics led to an almost unbelievable career as one of the country's best-selling comic artists. (Ages 18+, advisory: very strong language)

3.00-3.40
The Big Fat Comics Quiz of the Year
Stacey Whittle hosts an all-star quiz, kind of like, but legally distinct from, a certain festive television panel show. Featuring Gary Erskine, Al Ewing, Graham Pearce and Andrew Waugh, it will test the participants’ knowledge of news stories from the world of comics in 2011. Expect great wisdom and a certain amount of tomfoolery.

3.45-4.15
Studying Comics: Where to start?
Comics are pretty interesting! For anyone who’s thinking of analysing them a bit more closely, what are the most intriguing current topics to consider? Dr Mel Gibson will talk about the academic work that is being published about comics, graphic novels and manga and how it approaches the medium.

4.20-5.05
See you in the Funny Pages - putting the comedy in comics
What makes a comic comedic? Andrew Waugh chairs a panel with Nigel Auchterlounie, Simon Donald, Al Ewing and Graham Pearce, that will discuss how to be funny using sequential art. They’ll chat about what works, whether that differs in comics compared to other media, and what different audiences find the most amusing. All this and more in what’s sure to be a rib-tickling laugh-riot! Possibly.

Art Heroes’ Create a Superhero Competition
A fun drop-in workshop for all ages, running all day (10.00-10.30, 11.30-2.00, 3.00-4.45) outside the Bewick Hall
Ever wanted to create your own comic book hero? Well, now you can! Art Heroes will be hosting a drop-in workshop throughout the day at the Canny Comic Con where you can get tips and hints to create your own fantastic characters. You'll even be able to enter your character into a competition winner to win a subscription to Art Heroes’ flagship comic book, Halcyon & Tenderfoot - and have your character featured in a future issue! Wow!

Monster Madness with Ingi Jensson
A fun drop-in workshop for kids of all ages, running at 10.30-11.30 and 2.00-3.00 outside the Bewick Hall
Dr.Ewill is in need of a laboratory assistant and being the crazy scientist he is, he decides to make his own - but he needs your help to decide on what kind of monster!
Kick-start your monstrous creativity with Dr.Ewill and Ingi of www.teestoons.com at the Canny Comic Con! 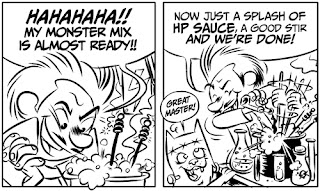 The "Make Comics NOW!" Mini-Comic Session
A drop-in workshop for comic-makers of all ages, running at 11.30-1.00 upstairs in Room Four on Level 3
Fancy making a comic? Right now? 'Mini-comics' and 'zine' comics are small, easy-to-make, and can cover all sorts of topics - not just traditional comic-book subjects. Drop in to learn more and start creating something! No experience is necessary, the aim is fun, and drawing ability is not essential. The workshop will show you how to make a comic from a single sheet of A4 paper and we hope all participants will leave with something fantastic they’ve made themselves. 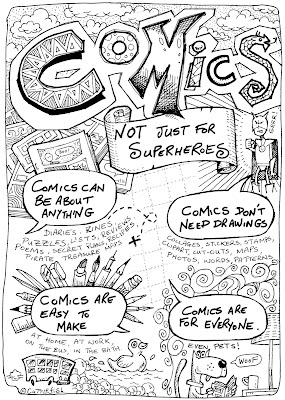