What went on at Newcastle City Library on 8th December 2012? We had something for everyone! Including all this:

10.30-11.00 "Meet you at the Monument" - comics and Newcastle
Gary Bainbridge, the artist and co-creator of Nightbus and Sugar Glider, will be speaking about how locations, specifically Newcastle and the North East, have inspired and informed his comics making practice.

11.10-12.00 Bunty and her pals. An interactive history of comics for girls in Britain.
Do you remember Bunty, or School Friend, Girl, or Jackie? Or are you curious about the idea that girls were reading comics before manga hit Britain? Dr Mel Gibson explores the history of comics for girls in the UK. Come along, hear a talk and get to read girls' annuals and comics from the 1950s to 1980s.

12.10 - 1.05 Things We Wish We'd Known Earlier - comic-making wisdom from folks who've been there
Making a comic is easy - but finding the best techniques to produce great comics and get them to your audience is hard! Stacey Whittle talks with Nigel Auchterlounie, Daniel Clifford, Nigel Dobbyn, Al Ewing, Jack Fallows and Gordon Rennie about lessons learned the hard way, as they share tips on avoiding the many pitfalls facing aspiring comic creators. This isn’t just a ‘how to make comics’ panel, it’s also ‘how NOT to make comics’!

1.20-1.55 Judge Minty. A screening of the Judge Dredd fan film.
Judge William Minty has spent his entire adult life policing the violent streets of Mega-City One and now he’s slowing down. When a lapse of judgement almost ends his life, he knows that it’s time to quit. He can choose to teach in the Academy, or he can leave the city and walk alone out into the anarchy of the Cursed Earth, taking law to the lawless. (18+) More info.
JUDGE MINTY IS A NOT FOR PROFIT FAN FILM, SHOWN WITH THE KIND PERMISSION OF 2000 AD AND REBELLION
JUDGE DREDD® IS A REGISTERED TRADEMARK, © REBELLION A/S®, ALL RIGHTS RESERVED.
JUDGE DREDD IS THE CREATION OF JOHN WAGNER AND CARLOS EZQUERRA.

2.05-2.55 Pictures of Me - comics and autobiography
How and why do creators tell their own stories using sequential art? Martin Cuttlefish chairs a panel with Nigel Auchterlounie, Ingi Jensson, Gordon Robertson, Mary Talbot and Lydia Wysocki, investigating the appeal of autobiographical comics to creators and to their readers, the variety of approaches that can be taken making them and the challenges involved in representing yourself on the page.

3.05-4.05 How I make a Graphic Novel
Bryan Talbot takes you through the typical creative process he uses when writing and drawing one of his books - from original conception to finished page, covering research, plotting, story structure, scripting, the use of grids, panel transitions, page composition, layout, use of eye level, lettering and colouring.

4.15-4.55 The Comics News Quiz
It's a quiz! About comics news! Not entirely dissimilar to a well-loved radio programme! Stacey Whittle asks the questions, Nigel Auchterlounie, Al Ewing, Andy Waugh and Terry Wiley might provide some answers.

11.15-12.15 Design your own Superhero
Can you imagine a hero who's faster than Flash? Stronger than Superman? Smarter than Professor X? Of course you can! But what would they look like?
Gary and Mhairi of Perfect Spiral will help you to design a costume to match your superhero's (or supervillian's) powers and style.

2.00-3.00 Digital comics inking in Adobe IllustratorA one hour practical demonstration (with questions and answers throughout) of digital inking techniques, using the vector-based programme Adobe illustrator. Nigel Dobbyn will be showing how he works from a pencil sketch through to inked linework ready for digital colouring in Adobe Photoshop (which will be covered in a subsequent session). All ages welcome.

3.30-4.30 Digital comics colouring in Adobe Photoshop
A one hour practical demonstration (with questions and answers throughout) of digital colouring techniques, using Adobe Photoshop. Nigel Dobbyn will be colouring up the linework produced in the previous digital inking demonstration, showing how to use a range of techniques such as use of layers, different selection tools, textures etc. All ages welcome.


DRAWING/ACTIVITIES TABLE
Fun for younger artists. Drop in all day - just outside the Bewick Hall 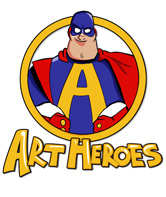 Monster Madness with Ingi Jensson
A fun drop-in workshop for kids of all ages
Running 10.15-11.15 & 3.30-4.30
Dr. Ewill is in need of a laboratory assistant and being the crazy scientist he is, he decides to make his own - but he needs help to decide on what kind of monsters to make.
Kick-start your monstrous creativity with Ingi of Teestoons at the Canny Comic Con.

Get involved and you might win a PRIZE, generously donated by Travelling Man Newcastle!


OTHER STUFF GOING ON
All over the place


Lydia Wysocki will be etching at her table throughout the day - talk to her to learn more and maybe get involved.

Ingi Jensson will be doing live digital art demos throughout the day at his table. Watch and learn!

Talk to members of the Readers of the Lost Art reading group - whatever your tastes, with their wide comic knowledge, they'll be happy to suggest books you might enjoy from the Library's extensive graphic novel stock (that you can of course borrow free of charge)!

The 99th Garrison will be patrolling the event and might pose for a photo if you ask nicely (and you aren't part of the rebel alliance).

In the evening, the Canny Comic Con action moved to Newcastle's super-swish indie cinema supreme, the Tyneside Cinema, for a unique wrap party - the DRINK AND DRAW FILM NIGHT!

It ran from 7pm to around 11pm. Everyone was encouraged:

"Just bring your drawing skills, (or, failing that, drinking skills). Everyone is welcome for some doodling and banter - and a rare chance to catch some cult comic adaptations on the big screen, starting with the original Buster Crabbe Flash Gordon series - then an audience-chosen so-bad-it's-good gem might be aired later in the evening!"

The audience spoke and demanded both The Phantom and Tank Girl! Some proper wacky comics got drawn.