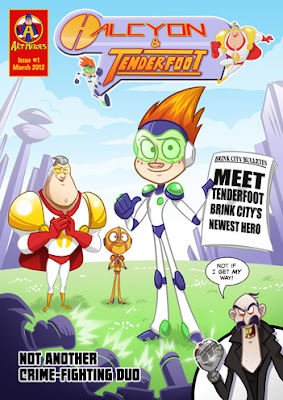 Who are you?
Art Heroes. Art Heroes will be represented by Daniel at Canny Comic Con, because Lee has family stuff that he has to attend to, while Daniel is far too selfish to put family before comics. Art Heroes makes comics and runs workshops that involve young people making their own comic books, cartoons and illustrated stories. Daniel is the writing, co-ordination and dogsbody side of the Art Heroes partnership.

What have you done / what are you doing?
Art Heroes has released 3 issues of Halcyon & Tenderfoot so far, with the final issue, issue 4, due in late December. Halcyon & Tenderfoot is an all-ages comic focussing on a father and son superhero duo as they try to bring back the good old fashion tradition of superheroics. Art Heroes has co-ordinated workshops all around Tyneside (and a bit further) since launching at last year's Canny Comic Con. The lads are currently developing a number of comic projects to pitch to publishers.

Further info:
You can find Art Heroes on the web at ArtHeroes.co.uk and on Twitter at @artheroesuk. Both are updated sporadically, but both still worth a look.