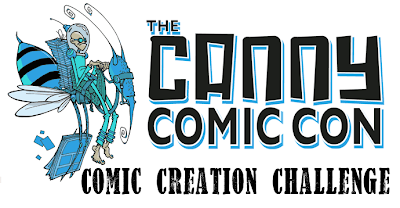 In its two previous annual events, the Canny Comic Con has been a big success for a little comic festival, establishing itself as one of the most fun (and most free!) events in the increasing hectic UK comics calendar. Everyone seemed to enjoy themselves and it may happen again.

However, this year, for a change, instead of the usual stuff, there’s going to be something different: THE CANNY COMIC CON COMIC CREATION CHALLENGE!

The CCCCCC! It’s all about one thing: making comics. No matter what your age or skill or experience, you can make comics, so why not come along and do so with other folks? Saturday 7th December 2013, 10am-5pm, Newcastle City Library.

Drawing is fun, right? Drawing pictures in sequence to tell a story is comics. Comics are for everyone - they can be about any subject and can be told in any style. Give it a go! It’s all free (as always), so what have you got to lose?

Okay, you’ve convinced me, but what’s actually happening? Is it just people dropping in to do a bit of drawing?

If that’s what they fancy, then yes! However, there'll be a few informal comics-making activities going on to provide prompts if people want one, AND we’ll also be hoping to work collaboratively to make a complete comic in one day. It might just be picking a theme and making an anthology of separate stories, but hopefully we can do something with a bit more structure that forms a vaguely coherent overall story.


How’s that going to work? Do I have to be an expert artist to get involved with that?

Not at all - only enthusiasm is required! We’re not necessarily looking for the slickest art, plus we’ll be keen for people to help plan the story and provide ideas. Collaboration on a grand scale! We want input from everyone! It’ll be kind of chaotic, but in a positive creative way. Join in!


Didn’t comics writer Mark Millar do something like this a couple of years ago?

Sort of, yes! At Kapow convention in 2011, he and 61 other comic creators (including many big names) put together a special charity issue of Superior in one day, setting two Guinness World Records (for fastest comic and most contributors) in the process. We’re hoping to make a bigger comic, with more contributors, even faster!

What, to get the World Records? Seriously?

Well, not exactly, it’ll be unofficial, we just want to make comics for their own sake, but yes, using the records as something to aim for seems like fun!

So what will happen to the comic when it’s done?

Depends how it turns out! If it's good, we might scan it all and give it away online or we might print some copies and sell them with profits going to charity. If you’re contributing, we can’t give you anything - other than the pure enjoyment of being part of the project (but we hope that will be large)!

Sounds good, but just to check: there won't be stalls and stuff this time?

That's right. The Canny Comic Con itself is taking a break, so no stalls or formal talks/panels/discussions etc. Just lots of comic-making! It will be a bit more low-key, but still hopefully super awesome fun.

Just turn up on the day! If you've got your own pens and whatnot feel free to bring them, but we should have some basic stuff available, so all you really need is yourself! If you have any amazing ideas or queries about this, drop us an email (see contact link above).