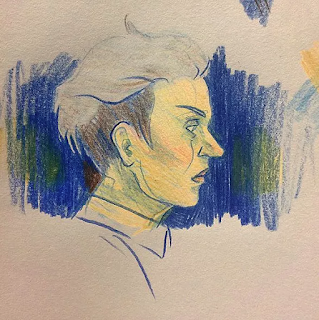 Who are you?
I am Tara McInerney, I live in Newcastle Upon Tyne, I'm a comic creatrix and illustrator, and I lecture at Teesside University in Comics, Graphic Novels and Sequential Arts.

What have you done / what are you doing?
My strapline: Aca-fan and compulsive storyteller with queer ideas.
I've worked for magazines such as Caravan and CCQ, and exhibited around Japan, Spain and the UK. Currently, I'm working on my latest comic Friendfiction, which centres on the lives of two girls who develop their relationship through a shared love of fanwork. The idea began whilst staying in Japan to research fan comics, after observing the wonderful interpersonal benefits of the fan community. This project is still ongoing, and very much a labour of love (ie; you won't see it quite yet...).
At Canny Comic Con I'll be presenting my self-published comic Myopica, a short on the futility of dialogue, and The Jay Mews Continental, a risograph limited-run comic anthology I started organising whilst studying MA Visual Communication at the Royal College of Art. It's been on hiatus for a while, but submissions for issue #2 are now open. I'm passionate about researching queer fan cultures and webcomics, an interest which constantly feeds my visual work, and helps keep my lectures current.

Favourite comics character (other than your own)?
At the moment, probably Professor Panther from BodyWorld by Dash Shaw. I have a thing for characters which are simultaneously powerful and pathetic.