Awesome North East public libraries (Newcastle, Gateshead and Stockton) are running a whole series of comics events over the summer under the banner 'Comic Chaos'. You want  kids' workshops with TeesToons Ingi and Art Heroes? YOU GOT 'EM! You want to design a character to win a trip to the British Library's tremendous 'Comics Unmasked' competition? HECK YEAH! You want a manga/anime/cosplay event in Gateshead? TASHIKA NI!

As part of this bonanza of comicking, and in association with Asteroid Belter: the Newcastle Science Comic and the unstoppable Paper Jam Comics Collective, we're bringing you the CCCCCCC, a day of free fun comics stuff for everyone - all day (10am till 4.30ish) on Saturday 9th of August at Newcastle City Library.


What kind of stuff?

Draw comics! Join in with collaborative art games, do some doodling, design characters, make comics and learn how to make better comics!

If you came to the CCCCCC in December, you'll be familiar with some of the activities we're running - making foldie mini comics, a big art jam, a character design wall, collaboratively redrawing a comic page-at-a-time, and the 'broken telephone' game (alternating an illustration and description without seeing previous stages). If none of that makes any sense, let us assure you: it will be: creative fun, accessible, really laid back and suitable for everyone of all ages and abilities.

Use comics! Comics techniques are used in many settings - Asteroid Belter science comic editors will be talking about putting scientific information into graphical form. You know those things on the internet and in newspapers that are kind of like graphs but also kind of like pictures with numbers and words? Like, graphic presentation of information? They’re infographics. We’ll use examples to find out what makes good, bad, and misleading infographics. Then it’s over to you to create better ones (or to take great joy in making a really misleading one). 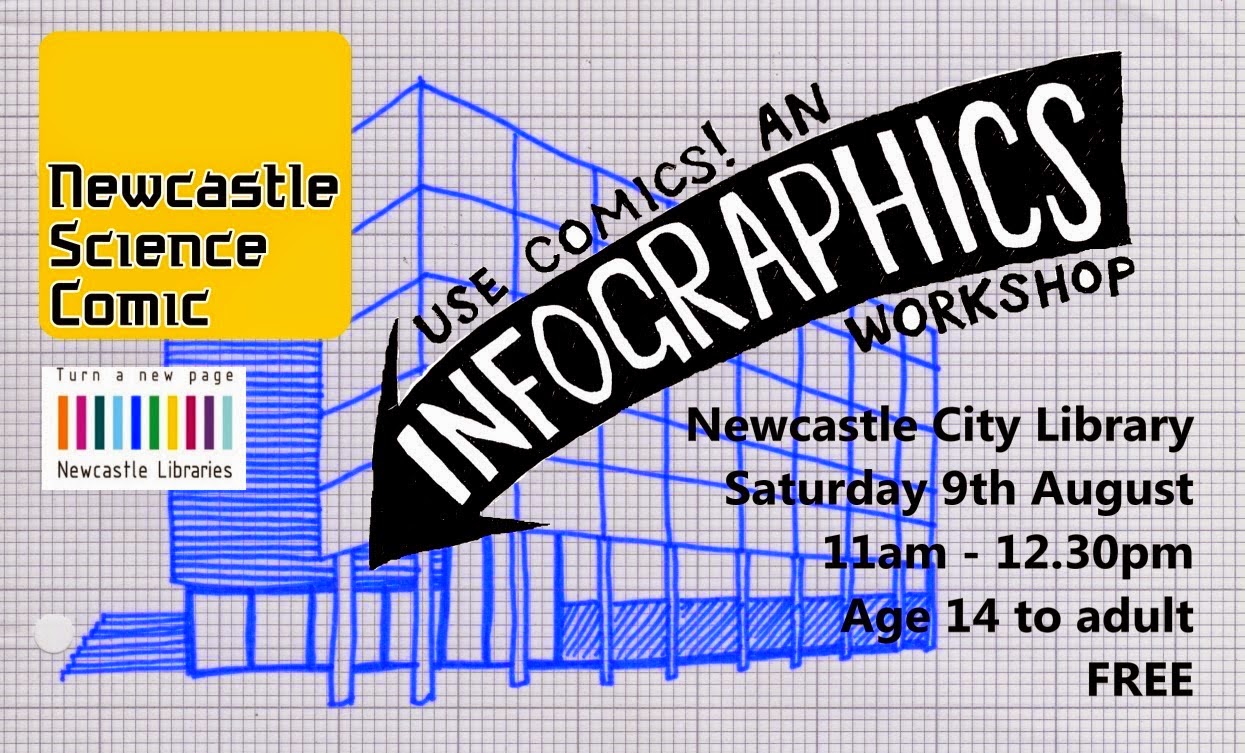 This session is run as part presentation, part hands-on workshop. Starts at 11am, suggested for ages 14 to adult. Places are limited so book a spot in advance: https://www.eventbrite.co.uk/e/canny-comic-con-comic-chaos-creative-collaboration-use-comics-workshop-tickets-12331699445


Read comics! Of course, the City library has a great collection of comics, graphic novels and manga to borrow from.  Plus we'll have a stall you can purchase some great new self-published comics from Newcastle's Paper Jam Comics Collective and other local creators.

However: a question: WHAT IS THE BEST COMIC THAT YOU PROBABLY HAVEN'T READ YET?

We're going to wrap up the day by trying to sort out this question - and we want your help! Various comic readers and makers will each be advocating for what they think is the best unheralded comic gem that most folks probably haven't read yet. Then there might be some audience voting and mucking about to decide on a 'winner', but really everyone's a winner, and it's all just an excuse to hear about fantastic comics that are worth checking out.

Furthermore: do you think you know comics pretty well? Can you present an informal but basically coherent explanation of why everyone should check out an underrated comic classic? Then get involved! Drop us a line and we'll try and fit you into our roster of comics advocates! It'll be aaawesome. (The comics being advocated for don't have to be suitable for everyone but the presentations and general vibe of the discussion should be fairly suitable for all, certainly older kids upwards).

Sounds pretty good, huh? Put it in the diary and get yerself along!

Queries or suggestions or anything, give us a shout! See you soon!