More blather about it and links to other write-ups at some point in the near future.

THANK YOU EVERYONE INVOLVED - all the creators, stall-holders, talk-presenters, panelists, workshop-facilitators, the costumed folks,  the Library, the amazing Team CCC, and all of you who came along and joined in.

The full EVENT SCHEDULE is now up.

Come on, admit it, it looks AMAAAAAZING.

Free to you, you lucky lucky people.

Our amazing (even if we do say so ourself) EVENTS listings are now pretty much complete. The schedule of precise times will go up soon! Tomorrow morning hopefully!

Where else can you get this level of amazing comics-related events TOTALLY FREE?
No comments: 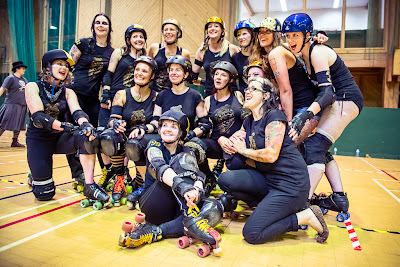 Who are you?
Newcastle Roller Girls are the largest roller derby team in the North East of England, forged when like minds, athletic ability and a desire to do something different collided with an imported American sport. Roller derby is a grass roots, full contact roller skating sport. It’s fast and it’s fierce - not for the faint hearted!

We’ve been part of the recent UK roller derby boom, with our ranks swelling more than we can believe and demand for our rookie course blowing us away with every intake. This interest & the hard work everyone puts into the league means we now have 3 teams:

What have you done?
Well, mostly we've been skating...

Who are you?
The Paper Jam Comics Collective, a comic-centric creative community based around the Travelling Man comics store in Newcastle upon Tyne.

What have you done / what are you doing?
We've been meeting fortnightly since the beginning of 2007, yakking on about comics, drawing comics (including our signature '24-minute comic' sessions, the results of which sometimes get posted on our webcomic blog 'Paper Jams'), publishing anthologies of work created by members of the collective on various themes, and generally acting as a hub for small press comic creators in the Newcastle area.

Three words about your favourite comics:
Completed in 24mins! 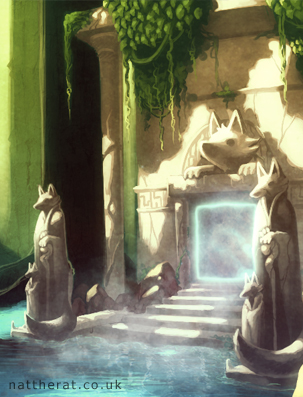 Who are you?
En Gingerboom - Avid devourer of Star Trek and veggies. Level 1 Freelance Illustrator with comic art and writing feats. SKILL: 7 STAMINA: 5

What have you done / what are you doing?
In terms of comics: Previously I've done a comic about social constructs and the power they have with a sci-fi backdrop, a comic about transgender experiences and issues, a comic about near-death experiences and revelations, and... a comic about being the only sober one at a party. A future comic will hopefully look at the ideas of personification and anthropomorphism and how they feature in the bonding process when any sort of acquaintance relationship is formed.

The current comic I am working on is about herd/social behaviour in times of danger and strife, but it might be easier to describe it as a buddy comic involving wartime and mobile phones. Unfortunately I won't have that one at Canny Comic Con, but I will have with me the one about near-death experiences and revelations titled What is it Katy?, which follows a little girl on a train journey as she sifts through a lot of confused events and emotions in her mind. The original version ran as an interactive webcomic online, and the printed version is the complete story plus print-only epilogue and bonuses. I'll also have prints, cards and merchandise (just in time for the holiday season of course!).

You'll see from all the profiles we've posted (navigable from the blog entry list on the right or by clicking the Guests button above) that some very interesting people will be at the Canny Comic Con.

And if you click the Events button above, you'll see that we're lining up some really amazing events and activities. Talks, panels, workshops, and all kinds of other interesting stuff.

Final scheduling is going to get sorted over the next few days but we hope you can now start to get a good idea of what'll be happening and why you should make sure you get along.

And don't forget that in the evening, from 7pm, we've got the Drink and Draw Film Night at the Tyneside. You like drinking and drawing? You like watching cult classic so-bad-it's-good films? You like hanging with some of the nicest and most talented folks around? Of course you do. It's free too - but remember, you still need to get a ticket if you want to come.
No comments: 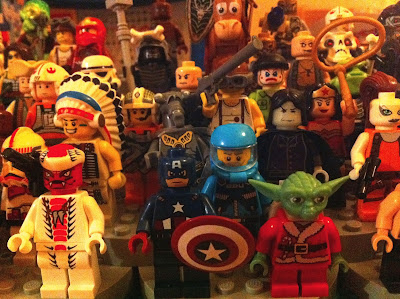 Who are you?
Calvinballronan - specialist Lego® vendor extraordinaire.

What have you done / what are you doing?
Selling bricks and pieces of all types, mainly online. At the Canny Comic Con, I will be running a Lego® Minifig Pick 'n' Mix, so come along and create your own character - with hundreds of pieces to choose from!

Who are you?
The Glasgow League of Writers - a collective of, well, Glasgow-based writers. All the clues are right there in the title!

What have you done / what are you doing?
Their first anthology sold out in less than nine hours at Glasgow Comic Con and they're bringing their second anthology, Horror, to Canny.

GLoW 2 – Horror is a collection of 12 short stories that will disturb and distress you. As all good horror stories should. Featuring contributions from actual award winning writers and from people who should have won awards too!

"Don't put me on the back, I want to be on the front cover of GloW2." - Grant Morrison. 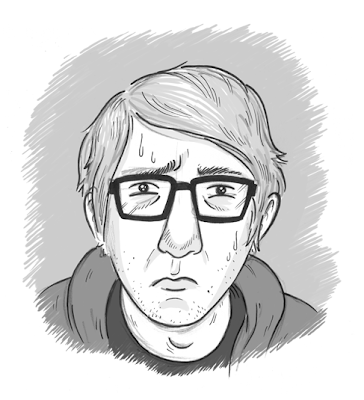 Who are you?
Jack Fallows, comic book artist and illustrator. I ran Jack & Daniel's Comic Book Workshops with Daniel Clifford between 2008-2010. I founded the Paper Jam Comics Collective in 2007, but have unfortunately been off the radar with their activities for the last year or two while I trained to become a primary school teacher. I now have a classroom with a comic book library in it and use all available time and resources to indoctrinate the future minds of this incredible medium.

What have you done / what are you doing?
I have been self-publishing for about a decade and don't like to sit still when it comes to comics. Even if there are big similarities between my projects, I'm always doing something new in each one to entertain or challenge myself. Past titles include Rusty Nail, The Gentleman Ghost, Costume Party and the 24-hour comic John Henry Split My Heart. I'm hoping to have the conclusion to my series The Big Bang (which features ideas, editing and scripts by Alexi Conman) completed by the end of 2013. More recently, I've been producing horror/comedy strips with PM Buchan that have appeared in Scream and Starburst magazines, as well as in our self-published anthology Blackout, which also features work by Phillip Marsden and Andrew Waugh.

If you already know me, it will probably be as that guy who did that cute thing about a Gentleman Ghost. Stupid ghost... 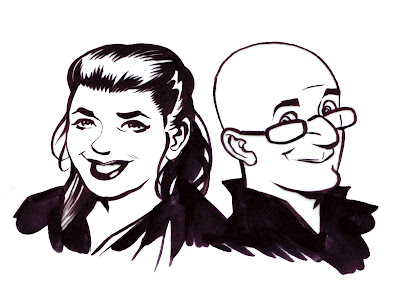 As Perfect Spiral Gary Erskine and Mhairi Stewart produce illustrations for academia and industry. We also deliver workshops on comics, creative writing and science for all ages.
We are passionate about communicating knowledge and believe that real learning comes from creating an interest in the subject being communicated. Interest is best delivered through passion, so all our illustrative works and workshops are based on one principle: Passion Based Learning.
Bios
Gary Erskine is an illustrator and comic book artist with over twenty years in the industry working with characters like Spiderman, Dan Dare and Captain America. He has also contributed to the Star Wars, Star Trek, Judge Dredd and Terminator licenses and has collaborated with high profile writers such as Mark Millar (Kick-Ass, Wanted) and Grant Morrison (Batman: Arkham Asylum, Superman). He also provides concept design and storyboards for games, film and television as well as material for Universities and Industry. He has been creating and delivering workshops for schools and libraries for 5 years; encouraging people to create art in all forms.

Dr Mhairi Stewart is a molecular biologist working in the field of Malaria research and a University teacher at the University of Glasgow. As a STEM ambassador she has been involved in University outreach work with all ages including Higher Biology workshops, science clubs and science week visits for over 4 years. She has also presented public talks and workshops in the Glasgow Science Centre on a wide variety of subjects from ‘Dirt’ (as part of the Wellcome Trust’s 75th anniversary lecture series) to ‘Brain Invaders’ a hands-on laboratory workshop diagnosing tropical disease in patient ‘samples’. Her aim is to enthuse children and the public with a love for science and design.
Mhairi additionally writes graphic fiction and short stories and contributes to creative writing and sequential narrative and comic book workshops. 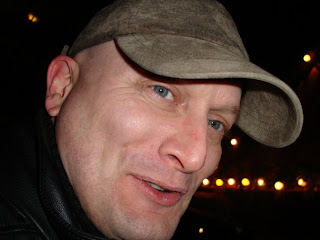 Gary Erskine has been drawing comics for over twenty years and has worked with all the major companies (including Marvel and DC Comics) and with some of the top writers in the industry. His highlights include Judge Dredd, Captain America and Dan Dare with Garth Ennis, with contributions to The Filth, Greatest Hits and Avengers/Thunderbolts. His current work on the motion book The Irons:Hybrids for Madefire is available free on iTunes for the iPad and iPhone and a return to form seen in his Warheads series. He has also illustrated for books and magazines, and contributed storyboards, concept and character designs for the games and movie industry. In his spare time he teaches workshops with his wife at schools, libraries and universities.

He is now also writing and publishing his own creator-owned books including Roller Grrrls (a roller derby series with co-writer/creator Anna Malady) and the soon to be released Zachariah Gunn:Dakota (with longtime studio colleague Dominic Reagan). Further releases will include Incendiary.US.