As mentioned in the plan, we had all kinds of activities running though the day. The 'Broken Telephone' game spiralled into delightful chaos very quickly, plenty of pages of Justice League Unlimited #0 were redrawn - with differing degrees of reinterpretation, some unusual characters were designed around concepts as varied as 'confused' and 'likes fish', and assorted other doodling and nonsense occurred.

Indeed, one of the nicest things about running these events is seeing people just making comics - particularly younger artists, and early on, it was great to see the creation of both a maths quiz comic and a wordless adaptation of a Pink Panther cartoon! Sequential art is a language that is intuitive and almost limitless in scope! COOOOOOMMMMMIIIIIIICCCCCCCSSSSSS  YYYYYEEEEEEEEAAAAAAAHHHHHH!

Anyway, some great stuff. And the redrawing exercise started at the CCCCCC in December is now complete - we have a set of pages that approximately resemble Amazing X-Men #1. It's sublime stuff.

We also had some specific sessions:

Lydia, editor of the Newcastle Science Comic Asteroid Belter, ran a workshop on infographics. It was awesome. She's written a full report here.

And we wrapped up the day with a debate to decide: what is the best comic that people probably haven't read yet but probably should? Twelve intrepid advocates made their cases, there was voting, and this is what happened... 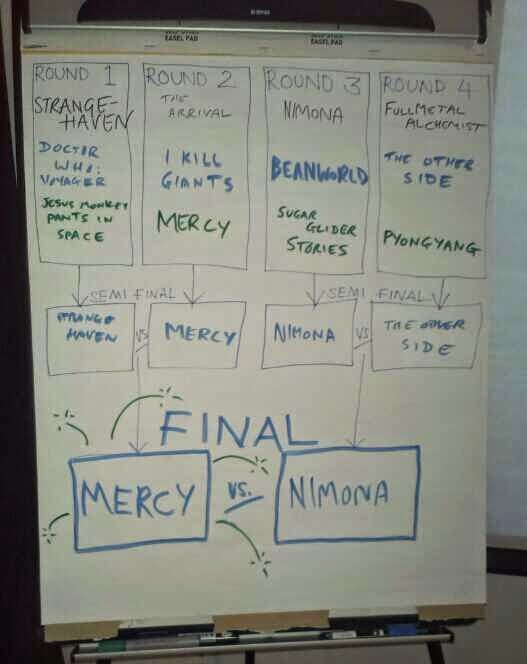 Cheers to Terry W for the photo﻿

It was great. ALL of the comics that were suggested are very worthy of your attention, so here are the details of what's in print, what's in the library, what's online, etc. Be aware not all the comics are suitable for all ages, so check before proffering these comics to youngsters. Otherwise though, all very interesting choices and worth a look! To check availability of library stock just check their catalogue.

WINNER!
Mercy
by J.M. DeMatteis & Paul Johnson. Out of print but generally not too hard to track down second-hand.

RUNNER UP!
Nimona
by Noelle Stevenson. Online at http://gingerhaze.com/nimona/comic/page-1

SEMI-FINALISTS!
Strangehaven
by Gary Spencer Millidge. Available to buy and for loan from Newcastle City Library (all three volumes).

The Other Side
by Jason Aaron & Cameron Stewart. Unclear, but seems to be in print and available to buy.

Full Metal Alchemist
by Hiromu Arakawa. Available to buy and some (including the first, but not all twenty-seven) volumes available for loan from Newcastle City Library.

I Kill Giants
by Joe Kelly and J.M. Ken Nimura. Available to buy and for loan from Newcastle City Library.

Pyongyang: A Journey in North Korea
by Guy Delisle. Available to buy and for loan from Newcastle City Library.

Tales of the Beanworld
by Larry Marder. Three volumes available to buy.

The Arrival
by Shaun Tan. Available to buy and for loan from Newcastle City Library.


Thanks to: Newcastle City Library for hosting, Lydia and Mike for running stuff, Travelling Man Newcastle for the comics to redraw, all the advocates in the debate, and everyone who came along and did stuff.