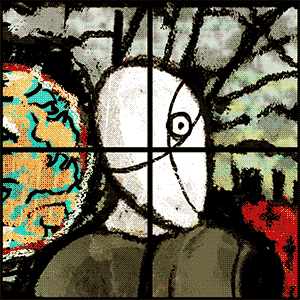 Who are you?
I’m Paul Thompson, I make things and talk about making things. Too much emphasis on the latter and not enough of the former. I’m quite lazy.

What have you done / what are you doing?
I’ve written and drawn for a number of anthologies, my own comic is called Tales of the Hollow Earth, recently I curated an exhibition and anthology art book called Invisible Beasts. I’ve been involved in putting together a lot of anthologies too, The Newcastle Science Comic and far too many Paper Jam Comics Collective “…And That's”.

At the Canny Comic Con, I’ll be talking about anthologies as part of a panel, starting off far too many Jam Comics which you can join in with, and be taking the role of ‘Nick Parsnips’ running ‘Just a Comics Minute’ – if you’d like to play or suggest a topic drop Canny HQ an email.

Favourite comics character (other than your own)?
Can I choose two?
I’m choosing two, but for one reason: Superman & Judge Dredd.
Both are perfect illustrations of how a character, backstory, location and supporting cast can create infinite stories to tell. Both characters have depth and backstory which isn’t immediately apparent, or even necessary to a new reader, making them immediately accessible to new readers.

As a result, both are occasionally mistaken for and criticised as one dimensional ciphers. The criticism is unfair and incorrect, but I think good writers are generally aware that this also, is an aspect of the character design that can be used to good effect where they can be viewed as a force of nature around which to tell a great many stories, a rock to bounce other characters off.

Further info:
I’m in twitter at @paulxthompson and my infrequently updated website can be found at http://www.hollowearth.co.uk/