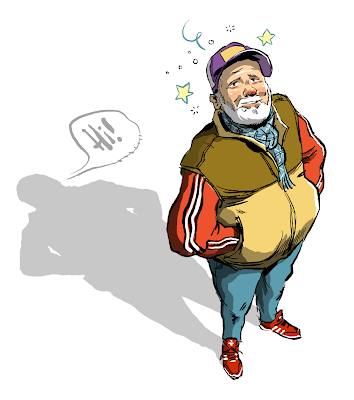 Who are you?
Ingi Jensson, a sequential storyteller and Concept Art lecturer at Teesside University.

What have you done / what are you doing?
It all began in 1999, and for the first 6 years I focused mainly on making daily comic strips, political cartoons and one-page funny comics for various magazines and newspapers in my home country of Iceland, mixed in with illustration work for the same client base. Eventually the seemingly endless deadline chase wore me down and I gravitated steadfastly towards illustration work, mainly for educational publishers in Iceland and the Netherlands.

After moving to the UK in 2008, I began offering comic-making courses to schools and libraries in my area under the name TeesToons which became a reasonably successful endeavour, though I never meant for it to be more than a way for me to get out of the house, now and then. This triggered a desire in me towards teaching that eventually lead me to where I am today.

In 2014, due to occupational boredom, I flung myself down the educational trail at Teesside University. That action accumulated with a funny hat and a red gown as proof my MA title in Future Design - that then lead to my current employment at the very same institution as lecturer in Concept Art at the Computer Games Department in the School of Computing.

At the Canny Comic Con I will be promoting my MA final project, a 16 page comic that was made as a prequel to my very first published comic in the Icelandic comic magazine BLEK in 1996. The newspaper-style comic on sale includes the old comic and the backstory of my main character, Aleks dBoro.
I will also be selling a collection of older work that I compiled for the very first Canny Comic Con in 2011.

Favourite comics character (other than your own)?
Gaston Lagaffe, by the Belgian comic artist André Franquin (1924-1997) is the comic character that captured my imagination as a youngster and would eventually be the instrumental force in pushing me towards making this visual arena my line of work. The Gaston books are a collection of gags that were published weekly in the Franco-Belgian magazine Spirou and tell of the endless blunders carried out by Gaston in his work as an office help at the Spirou Magazine. Several pages were translated to English in the early 90’s under the name Gomer Goof, published by Fantagraphics.