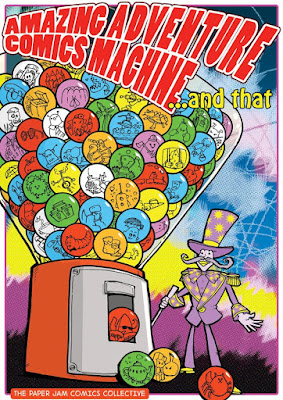 What have you done / what are you doing?
We've been meeting regularly since the beginning of 2007, yakking on about comics, drawing comics (including jam comics and our signature '24-minute comic' sessions, the results of which sporadically get posted on our webcomic blog 'Paper Jams'), publishing themed anthologies of comics by members of the collective, and generally acting as a hub for small press comic creators in the Newcastle area.
Our all-ages adventure-themed fourteenth anthology The Amazing Adventure Comic Machine ...And That will be launched at Canny Comic Con!

Favourite comics character (other than your own)?
Batman! No, wait, not Batman, we didn't think about it properly! Or maybe it is Batman? Er.....