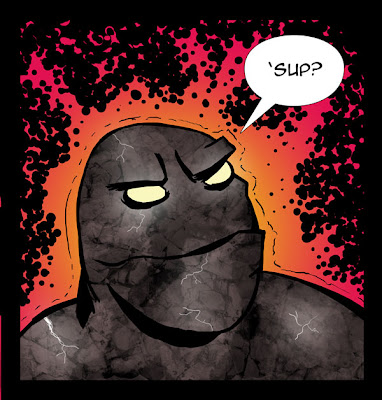 Who are you?
angelKat Entertainment. A team of artists, writers, and one code monkey, dedicated to creating new and innovative comic titles for your enjoyment. The team consists of: Davy Shirley (the founder of the group as well as writer, artist, and professional code monkey), Paul Burr (writer and editor), Donna McGarry (cartoonist), Anna Sheldrick (writer, photographer, and, in her words, token Asian), Josh Gahstly (writer, and cartoonist), and last but not least Clair Honeybadger (artist).

What have you done / what are you doing?
aKE was launched in 2009 as a solo project by Davy Shirley, with our flagship webcomic title Fera now approaching it's 4th anniversary, it has been very well received by the LGBT community - with issues already available in print, and the first volume being released in 2013. Since then the team has expanded and we have a couple of new titles available now in print including: angelKat Adventures - a mini-comic featuring our mischievous mascot, and The Editors - a tale of conspiracy and capes as a shady organisation conduct ret-cons in-world.

We're also currently working on several projects that will be available soon, including new issues of the titles mentioned above, a comic strip series called Offices & Accountants - where Dread Knights and Barbarians unwind by playing an RPG about middle management, and a collection of short horror stories for the first issue of our series, angelKat Presents.