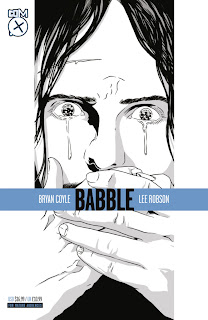 Who are you?
Lee Robson. Writer, tea drinker, ne'er do well.

What have you done / what are you doing?
I've written for the Eagle Award nominated FutureQuake, and its sister publication, the horror anthology Something Wicked. I've also been a regular contributor to the Accent UK series of themed anthologies (Robots, Western, Predators and Zombies 2 are out now; Victoriana is due for release in 2013), and I've written a fair old chunk of stuff for the 2000AD fanzines Zarjaz and Dogbreath. Oh, and I wrote a strip for Stacey Whittle's Into The Woods collection. My first graphic novel, Babble (with Bryan Coyle) is due for release in December 2012, from Com.X - which is available for pre-order NOW from all good and disreputable comic shops with the code OCT120971, and it'll be available from bookshops after the 19th of December. I will have preview pages with at Canny Comic Con, too.

Currently, I'm finishing up some small press strips - one of them may be available to read very soon - and beginning to develop a new project with my Babble collaborator Bryan Coyle, which we'll be looking for a publisher for in the new year.