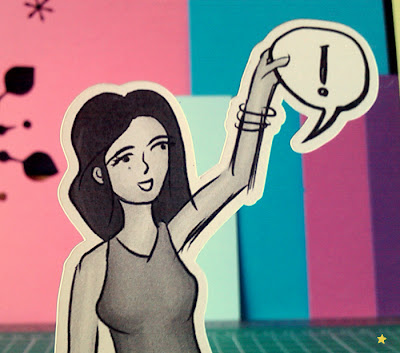 Who are you?
I'm Brittany Coxon, I do design and illustration. I like making things out of paper including comics.

What have you done / what are you doing?
My work appears in a handful of the Paper Jam Comics Collective Anthologies including Art... and that and History... and that. I recently added a second 24 hour comic day to my "things what I've done" list, this time I created an alright comic, it doesn't have a title yet. It's got space cars, space robots and space quests in it, feel free to make suggestions.

I also make stationery, concentrating on custom designs for things like greetings cards, usually combining my illustrations with layers of paper and card. I've got plans for a comic with bits cut out of it in a similar style but right now it's an interesting format that doesn't have any kind of story to go in it. Most recently I've been involved with the Newcastle Science Comic team, providing enthusiasm and editorial input.