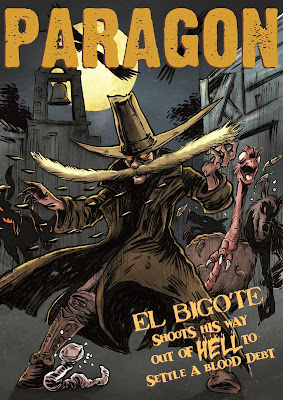 Who are you?
Dave Candlish - publisher/editor of anthology comic, PARAGON.

What have you done / what are you doing?
In recent years I've contributed to the honestly-it's-not-Doctor-Who anthology Dr WTF?!  I edit and publish the three times a year anthology comic, PARAGON, which was nominated for an Eagle award as best British B&W comic in 2010 (which was nice) and have just launched a new horror anthology AAIIEEE!!! (both of which I'll have with me on the day).

I'm currently working on the third book of stories for my time-travelling, demon-hunting Japanese warrior Jikan - a kind of cross between Hammer films' Captain Kronos and Quantum Leap
(with a hint of Samurai Jack). Check out the blogspot and lulu.com shop for preview art and details!