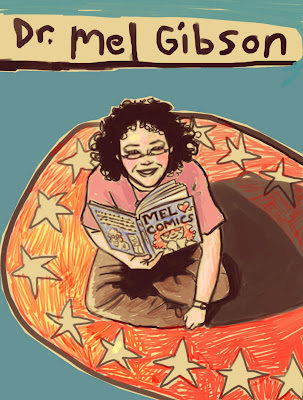 Who are you?
Mel Gibson (no, not that one. I’m the other one, Dr. Mel Gibson) – I’m a lecturer at Northumbria University and I research in the areas of comics and children’s books.

What have you done / what are you doing?
I’ve been helping libraries, schools and other organisations to develop graphic novel collections and use comics in the classroom since 1993.

I write about comics too. My most recent stuff can be found in Jason Lee’s book Cultures of Addiction, Smith and Duncan’s Critical Approaches to Comics: Theories and Methods and Paul Gravett’s 1001 Comics You Must Read Before You Die: The Ultimate Guide to Comic Books, Graphic Novels and Manga.

I’ve also been a guest editor, most recently for two editions of the Journal of Graphic Novels and Comics, the first on Superheroes and Gender the second Audiences and Readership.

I was asked to be a judge for the first British Comic Book Awards, along with Stacey, and was equally thrilled to be invited to take part.

Finally, I’m part of Comics Forum, a group of British academics who research comics. I’m happy to talk to anyone about studying comics.