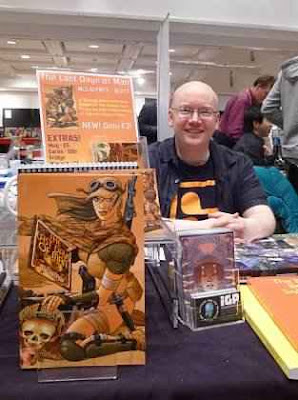 Who are you?
My name is Paul von Scott. I'm a writer/editor who has been producing comics for over 10 years now and am planning on having my third attempt at 'the novel' in the new year, when I become an ex-Library Assistant.

What have you done / what are you doing?
I eidted and co-created Solar Wind, the award winning homage to british kids comics, I then wrote the criticially acclaimed Omnivistascope sci-fi comic and now, well, I'm finishing off many of my long-running comic projects. I have just released The Last Days of Man, a collection of all my collaborative work with Paul McCaffrey, which features four stories of the exntinct human race linked by an alien professor three million years in the future. I'm also working on collections of Rathbone - Last of the Organic Wars (the tale of the fall and rise of a robot senator), Space Lord (a diminutive ruler of the galaxy who produces small press comics in his spare time) and Quisling (a man tasked to guard the country from threats he doesn't believe in and probably don't exist).