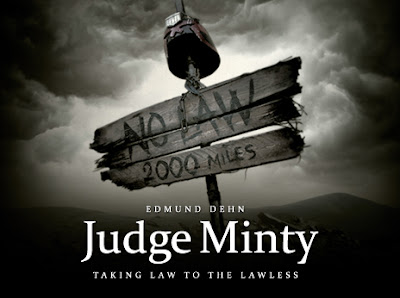 What have you done / what are you doing?
Judge Minty - The Judge Dredd Fan Film. A 25 minute fan film based on the world of 2000AD's Judge Dredd.

Judge William Minty has spent his entire adult life policing the violent streets of Mega-City One and now he’s slowing down. When a lapse of judgement almost ends his life, he knows that it’s time to quit. He can choose to teach in the Academy, or he can leave the city and walk alone out into the anarchy of the Cursed Earth, taking law to the lawless.

There will be a screening of Judge Minty at Canny Comic Con!
[Unfortunately due to this film being uncertified at this time, screenings are 18+ only.]

JUDGE MINTY IS A NOT FOR PROFIT FAN FILM, SHOWN WITH THE KIND PERMISSION OF 2000 AD AND REBELLION
JUDGE DREDD® IS A REGISTERED TRADEMARK, © REBELLION A/S®, ALL RIGHTS RESERVED.
JUDGE DREDD IS THE CREATION OF JOHN WAGNER AND CARLOS EZQUERRA.